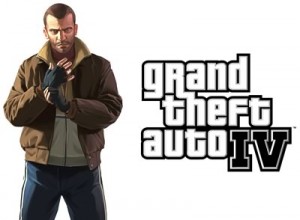 Some weeks (months?) ago, me and my good friend Jerome started playing Grand Theft Auto IV

together. I know I know, I’m a bit late for a “review” but get used to it, I like to let my games sit there and age a bit before I pick em up and play them seriously. Since we play on the PS3 and I bought the game when it came out, we had to delete my old save file and start over in order to unlock trophies. My old save file was about 30% into the game. Now it may sound sad, but I think it’s the best thing that could happen.

Starting fresh made us really pay attention to the story. What’s cool when playing with a friend is that when you’re not holding the controller, you can enjoy watching the action just as if it were a TV show. And GTA4 is one hell of a show, let me tell you. A lot has been said about the game since it came out, and even though the press gave the game awesome scores, the impression I got was that the game wasn’t that much fun, had too many flaws, a story that went nowhere. I even heard some people on some podcasts say that the story being so solid was bad for the “fucking around beating up hookers” that we enjoyed so much in the past games. For those of you who don’t know anything about the game, feel free to check out the wikipedia article, I’m lazy.

Here’s my take so far (we’re roughly at 60% now). To fully appreciate the astounding work Rockstar did, you gotta spend a while in Liberty City. You have to stop and listen to the conversations on street corners, you gotta drive around town listening to the radio, cross the river at night, take a cab and look around through the full ride. After 5-6 hours spent inside the game, it becomes like a very good book. You can’t stop thinking about Niko and his story, his future, his friends, his enemies. We have been playing for 4 to 6 hours every week since the beginning and it’s an ideal format. We stay interested in the story, we remember what we did last week and it’s really motivating us to get to the end.

Even the greatest game is bound to have *some* flaws. Here’s a couple of issues I encountered. The driving frustrated me a LOT at first (and there are so many pursuit missions) but after a bit of practice you get it. The trick is to not treat this game like a racing game where you have the pedal to the metal constantly. You need to drive smooth most of the time, only pressing the trigger halfway. Only then can you really enjoy the cars. When you go full speed, you get what I call “moon physics” all the time. The car tilts way too much when you turn a corner, and you keep jumping into the air at the slightest bump. And it sucks bad. Another problem is the cover mechanic. Sometimes when you press R1 to hide behind a wall, you’ll stick to the wrong surface. In 30 something hours of play, it happened often enough that it became very frustrating. Aiming can also be tricky at times.

That said, the game is absolutely solid and fun. The story loses some speed past 50% but it’s almost a relief since the first half of the game is so jampacked with all sorts of crazy action. I cannot wait to get to the end. I’ll post more about it as we progress.

One thought on “We love Grand Theft Auto IV – part 1”