Welcome to another edition of Unintelligible Wednesdays, where I try to post something when I have no energy to do so.

I did see Watchmen finally, and it was awesome. Really it was. The only thing about writing a review for Unintelligible Wednesdays, and about such a great movie, is that I risk destroying the spirit of it with a crappy review. 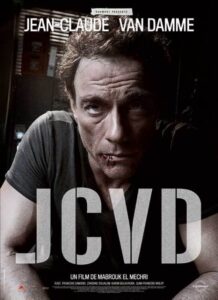 JCVD stars Jean-Claude Van Damme, ex-fighter extraordinaire, action hero, and all around great guy. He plays himself as a washed-up action hero, stuck with half-assed roles in half-assed movies. In JCVD, he’s still fighting, but for custody of his daughter! As the box says, it’s “The Biggest Fight Of His Life!“.

It was actually pretty good. The film takes place in his native Belgium where he’s treated as a hero. The locals adore him, a native (and famous!) Belgian son. But then, he gets caught up in a small time robbery, and hey, washed up actors need cash to maintain that Hollywood lifestyle. Is he guilty? Did he do it? Watch and see.