That’s right. I’m on my first diet and it’s the Primal Diet challenge with co-blogger Dan (who’s doing way better than I am). This is sometimes referred to as the Paleo Diet, Paleolithic and the NO CEREAL EVER diet.

The question I’ve been getting when I mention to anyone who will listen that I’m trying out the Primal Diet is, “Why? You don’t look like you need to go on a diet?”, to which I say, “Don’t I???”, while looking deep into their souls. So yeah, the Primal Diet to me is mainly about a) changing some bad eating habits, and b) losing the gut that has slowly been moving into my house one fatty deposit at a time. Yep. And it hasn’t contributed one dime to rent.

Now it’s only been 3 days and this challenge is tougher than quitting smoking was. From Day 1, I realized that I was addicted to cereal. Cereal is not primal and worse, it’s full of sugars which are often hidden. In fact, I still have a cereal problem and have taken some steps in admitting that to myself while looking back at all of the people I’ve hurt with this terrible, terrible addiction. Just one more bowl of Shreddies….please!

But no. Onward we push towards purity of soul and mostly Primal recipes!

All this to say that I royally fucked up the first three days and basically lived on cereal and lattes (milk is bad too). However, I did have half a piece of BBQ salmon with my pizza last night, so all was not lost. Plus I still exercise regularly, just that I’ll be changing up that routine to focus more on gut-toning.

Anyway. Here’s my weigh in from the beginning of the week: 160lbs and 36 inches around my waist. In fact, for the remainder of the challenge, we’ll focus on the waistline and not the weight. At 5’11”, 160 isn’t bad at all. The extra weight just needs a little guidance.

So here. Sausage with steamed asparagus and raw vegetables (tomato, celery, and zucchini), sprinkled with fresh black pepper. Did I do it right this time?

Oh yeah: There’s some debate about sausages and how they fit into the primal world. The number 1 rule would be to read the ingredients and then decide. 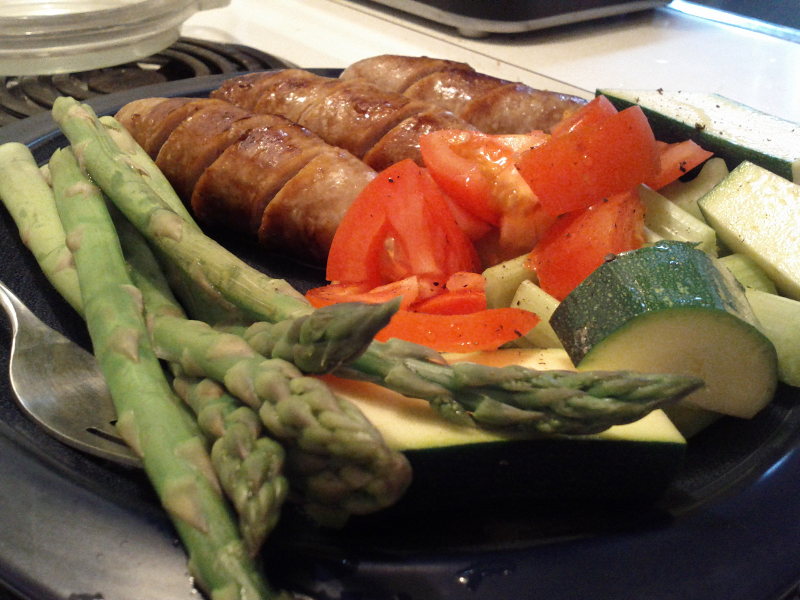 3 thoughts on “The Real Primal Challenge”