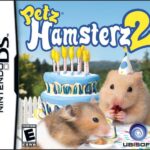 Since I’m in the process of moving into a new apartment, I have much less gaming time. So I’ve decided to try a little experiment. I am going to play Hamsterz 2 exclusively for the next two weeks. The rules of the experiment are:

– No walking down the street with my penis out.

– I am not allowed to play ANYTHING other than Hamsterz 2

– I gotta play for at least 15 minutes every day

– When the two weeks is over, I am getting drunk and playing Call of Duty for 48 hours straight. I will also throw the Hamsterz 2 cartridge in a fire.

I started the game by adopting “Grignotte”, a stupid beige and brown female hamster. I have been trying to murder her by overfeeding her. No luck. I also bought her a wheel, hoping she’d break her neck but the little shit is quite agile.

One thought on “The Hamsterz Experiment”