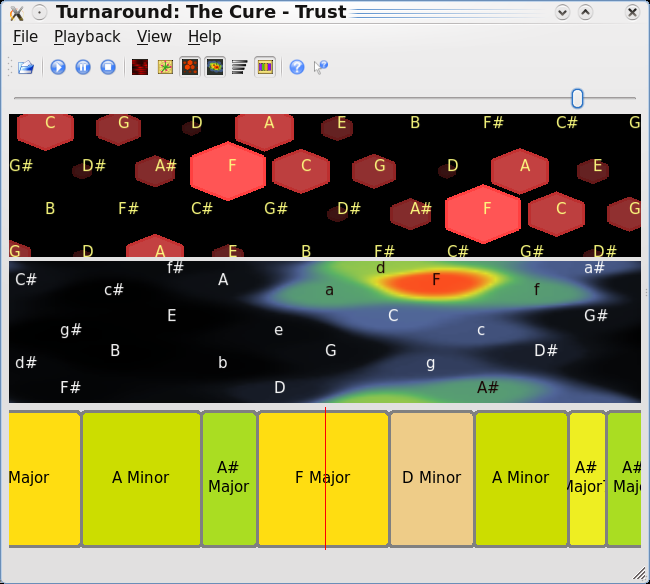 If you’re a musician, or guitar player specifically, you’ve probably come across one of those songs that you want to play, but for some reason you either can’t figure it out or you can’t find the tablature for it.*

So I searched the Internet for “song chord analyzer” and came up with the Clam Project aka the C++ Library for Audio and Music. The CLAM Project includes an application called Chordata, which will analyze any mp3 and play it back for you while telling you what chords are used in the song.

I gave this a test drive with ‘Taint No Use from Black Francis‘ Nonstoperotik which I’ve been struggling with for months. For example, I knew the song was in Dm and there’s an F and an A# in there, but I just couldn’t put it together. It probably has something to do with the song being piano based, and my ears just suck at following piano chord changes.

Once you’ve opened the mp3 file, Chordata analyzes the song in less than 10 seconds and plays it back, visually presenting the chord changes to you. Sweet!

Anyway, here’s a very good example of how it works, even though they used a Coldplay song to demonstrate.

The CLAM Project also has a few different applications along with Chordata like the Annotator and Network Editor. The software is all open source under the GNU public license and is available for Linux, Mac OSX and Windows. Download it here.

*Chordify now does pretty much what CLAM does.