A few months back I had a serious hankering for some Tremolo action. Turned out, the timing was right and a colleague of mine just happened to have an Electro-Harmonix Wiggler pedal to loan to me.  Now before I go into any detail, let me say that if you’ve never used any tremolo effect before, The Wiggler is probably not the place to start due to its sheer over-the-top-ness. I mean, Electro-Harmonix was always known for being bold and fearless, but you’d need to spend many hours (weeks) with this thing to really get a feel for it. But what do I know? Make your own choice. Effects are all about discovery and colouring your sound, so maybe The Wiggler should be your first introduction to tremolo. And vibrato. And wurl. And etc. There are no rules, right?

First of all, the look. Someone once told me that strawberries were the most audacious fruit because they wore their seeds on the outside. I know, it sounds dumb. Like strawberries wake up every morning and make that choice before they head off to the office.  You can almost picture them maybe carrying a little briefcase, and riding the subway with other fruity citizens like bananas and pineapples. My point being, is that like the “daring” strawberry, Electro-Harmonix’s The Wiggler proudly displays its tubes on the outside. And that’s proudly, not stupidly. Note that they even thought of a little protective cage which prevents those tubes from getting smashed immediately. The look says, “I am a tube pedal, and if you don’t believe me, look at my tubes!” That’s right. Electro-Harmonix is indeed audacious and they don’t lie about the guts in their pedals. 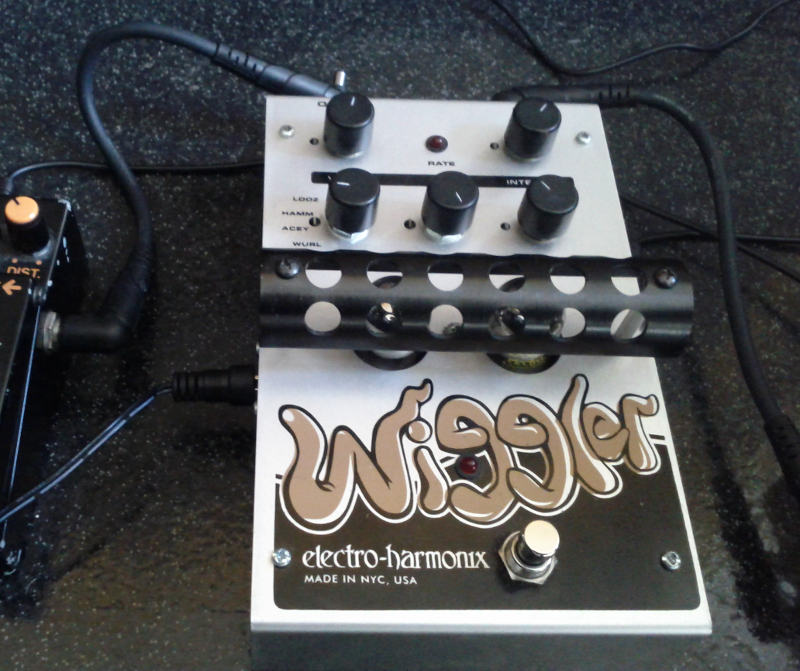 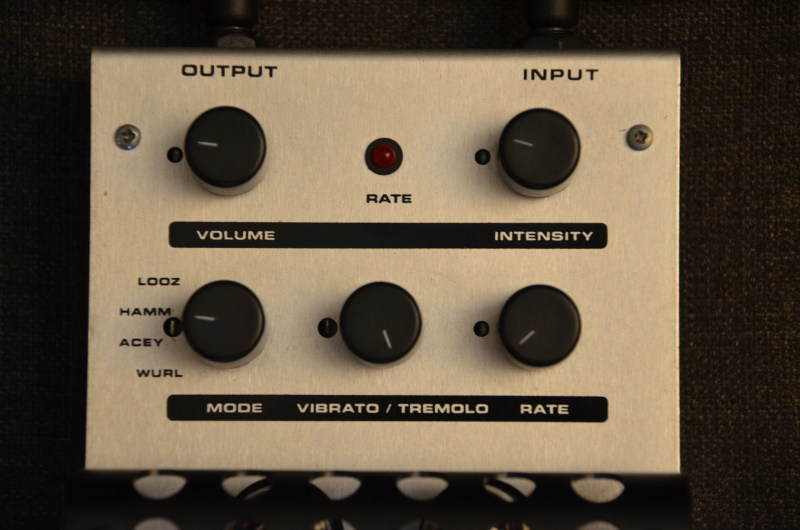 I’m not going to go into every little thing that this thing can do but let’s have a look at your options. If you’re familiar with the Boss TR-2, you’ll notice that this looks nothing like it.  The Boss TR-2 has three controls: Rate, Wave and Depth. Basic stuff, but effective. It sounds great too and can give you some subtle vibes or at the outset, will bring you to the edge of something weird and dreamy. The Wiggler though, takes you to another planet.

Take the Input and Output levels for example. When you start messing with those, you start heading into strange regions of delay of attack. Try bringing the output way up, and bring the Input way down, or vice versa. Fun things start to happen, especially when you bring the Rate way up too. It takes a lot of experimentation, but when you start to “get” it, it’s a lot of fun.

The Vibrato settings are mostly about tone, of which you have four modes: Looz, Hamm, Acey and Wurl. To try and describe them and do them justice would be foolish, so check out the demo: