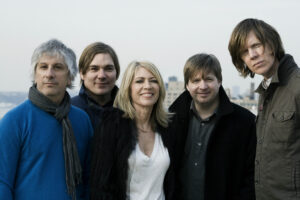 I wanna address two things. The very probable death of Sonic Youth, one of the bands that changed my life, and the fact that this guy exists.

Sonic Youth are probably over at the right time in their career. It’s super sad because they mean so much, but everything after Washing Machine was a blur to me. So I guess it wasn’t as relevant or they started targeting a different audience and succeeded. In any case, I hate it when [the things that make up my world] disintegrate, and Sonic Youth were a huge chunk of my teen years. They are the reason I play music today and their drummer is one of my heroes. But yeah, Thurston cheated and reminded us all why it’s a very bad thing to have a couple in the band. So, I raise my glass to Chelsea Light Moving and Body/Head and Disappears and Glacial and every member’s solo stuff. Guys, I will miss you as Sonic Youth, and I will listen to your stuff until my ears get too old and fall off. Also, no matter what anybody says, Dirty was the best record.

Now, Mikal Cronin. Discovered him on Conan. He brings back everything I loved about the 90s. He’s awesome! Buy his records. I know I will.

We’re aware that the updates have been few and far between lately. We’re sorry about that. Then again, the web is full of entertainment, so you guys have been doing OK. But yeah, we’ll try to write more often and regularly. We also have a particularly bad batch of Bobbipins on the way!

And now you’re swimming for the shore

You left me drowning in my tears

And you won’t save me anymore”