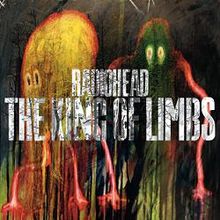 Finally got a copy of Radiohead’s The King of Limbs and I found it very easy to hear on the first listen. No, do not take that to mean ‘easy listening’. It’s not like that at all. I’m just really digging the arrangements on this one, and there’s a definite drum and bass throwback thing happening in the way that they’re using loops and samples.

If you’ve been following Radiohead over the years, you shouldn’t be surprised by anything that they do anymore. Sure, back in the day, Kid A was probably THE most freakish departure, but like all things Radiohead, you’ll probably ‘get it’ after a few listens, and ‘it’ is usually awesome.

Thom Yorke’s voice still has that haunting, ethereal quality to it. It’s like his voice has taken him yet one more step towards enlightenment. You can’t understand a single word he’s saying, but there’s beauty in the phrasing, which is sometimes a single word stretched out to an impossible thinness, only to be somehow wrapped around the wind and sucked back into the earth and combined with some ancient aquifer. That’s the best I can do to describe it short of breaking it down into individual atoms, which I’m sure is pretty close to what Thom is actually singing about.

One thought on “Thom Yorke Now Singing At The Molecular Level”