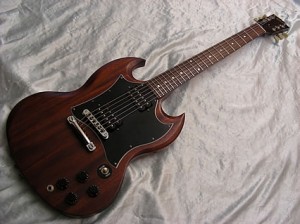 It’s time for time for being opinionated time!

Catchphrases and buzzwords sell stuff, right? So when some company comes out with a product, that product is easier to identify if it’s got a catchy buzzword attached to it.

Like that damn Gibson SG Faded. Why didn’t they just call it the “Gibson SG Barely Finished Guitar Because We Wanted To Save Money On A Coat Of Paint For The Damn Thing”? why? Because then the acronym would have been the Gibson SG BFGBWWTSMOACOPFTDT. And that would make your head explode.

Luckily for Gibson, “SG Faded” caught on, and even luckier for them, it sounds half decent with a thinner coat of paint than the regular Gibson SG. The annoying thing about these guitars is that they were created “faded” to make them look road weary and well traveled. Isn’t that like buying a new pair of jeans that are pre-ripped? Yes it is. It’s the same exact same thing and it’s pretentious.

But yeah, half the draw in buying a guitar is if its look appeals to you. And most everybody knows that guitar companies don’t sell guitars. Rockstars do. It’s just so annoying when guitar companies sell a 3 day old guitar and try to make it look like it’s from 1954, complete with nicks and worn out paint. And worse, they’re selling it for $1600. Yep. We’ve been buying designer musical instruments while playing anti-establishment music. Awesome, huh?

Next thing you know, you’ll be buying a $600 leather jacket with your guitar company’s logo on it to go with the rest of your jackets.

But I have to admit, I gave it a shot. When I bought my own Gibson SG Faded, I started getting chicks like crazy! I just had to strap it around my neck, leave the house and walk down the street and BANG, I was a chick magnet for all them guitar lovin’ babes. Who needs the dating scene when you’re slinging a $1700 Gibson SG off your hip? Yeah, walking around with a guitar 24/7 makes you look like a fool, but the babes don’t see it that way.