Well if it isn’t time for some Ostrich News!

Check out the radical box: 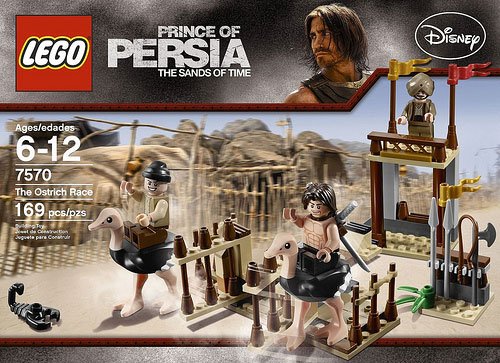 I’m really digging the Lego scorpion over there on the left.

There are a bunch of different Prince of Persia themed Lego collections being released in anticipation of the Prince of Persia movie coming out in May. It stars Jake Gyllenhaal who’ll probably cry his way through the whole thing. I really don’t know what I have against Gyllenhaal tonight, but the idea of writing anything about him seems to be pissing me off. So let’s just leave it at that.

I don’t really care about the movie or the newer games, although I hear the Ubisoft games are pretty good. They’re probably available for the PS3 and Xbox and those other snazzy gaming consoles. But that’s just what I hear. All I know is that I used to play the olden one from olden times on my ancient 386, and it was awesome for one reason.

Because you got to fight skeletons and shit: