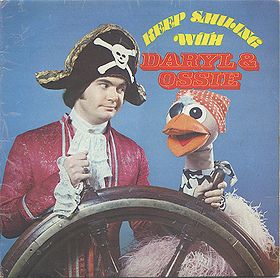 Hey mate! I don’t need to explain, but the only reason I’m posting the following video is because Hey Hey It’s Saturday came up in my latest Google search for ‘ostrich’.

It seems that Australia’s longest running T.V. show Hey Hey It’s Saturday will be coming back in 2010, and will be hosted by Daryl Somers who hosted it for its entire 27 year (!) run. The show ended in 1999.

But since this is BFO, we’re interested in the Ostrich News portion. Do you see Ossie Ostrich there on the left? Ossie was hugely popular in Australia. So much so, that an Ossie puppet now lives in the National Film and Sound Archive in Canberra. You can say he (or she, I have no idea) was like the Australian Big Bird or something, but with actual comedic talent. Big Bird needed a serious beatdown in an alley. Still does.

Incredibly, in all those years that Hey Hey was on, I have never heard of the show, Daryl Somers, or Ossie Ostrich. Maybe it never made it to North American airwaves. I’m glad I found this though, and through the magic of the internest, I can catch up on 27 years of off color jokes and various puppet shenanigans. Ah yes, the ’70’s. A time of comedic freedom before the politically correct militants starting breaking heads over the slightest  perceived offense.

Addendum: The original video has been removed (thanks bastards!). So here’s a replacement clip which is so much worse than the original one but at least includes an Ossie Ostrich and Johnny Depp face-off. Enjoy. Maybe.