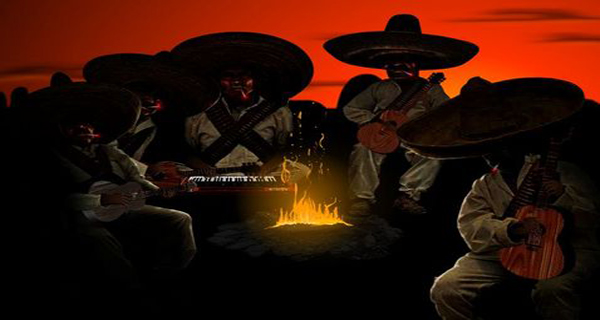 Those crazy guys over at Amanita Design have a relatively new online game and it’s called Osada. In Spanish, Osada translates to English as ‘daring’. However, in Slovak the word means “settlement’. So which one is it? Osada can indeed be viewed as a daring or even bold game while at the same time, Osada features strange and mysterious desert outposts and surreal suburbs. Perhaps the word is intended for both.

Osada is billed as an interactive music video but it’s not just another point-and-click game like Samorost and Machinarium.

The difference is the music, which has a Spanish/Mexican theme as opposed to the music in Machinarium and Samorost which was more ethereal and mind meltingly New Age which had a very immersive effect. Osada has a completely different vibe.

The goal is to point and click your way through the various levels which are more like scenes, some of which are populated with sleazy outlaw dudes hanging out in the desert or dingy dive bars, doing what outlaws do: playing guitars, ping pong or swiggin’ tequila.  If that sounds weird, don’t worry. It gets weirder.

Like Machinarium and Samorost, there’s a high level of surrealism here, and although Osada isn’t as visually pleasing as those other two games, this is some well put together stuff (even if the puzzles are a bit more obvious and less intuitive than previous games).

You can check out an Osada game walkthrough here: