I’m going to try talking about another game I’ve never played. Join me, and then call me a n00b. It’s cool, I can take it.

Yes, it’s Deus Ex: Human Revolution, the third in the Deus Ex series of Cyberpunk games that take place in a the future. It’s from Montreal‘s own Eidos software, which is a subsidiary of Square Enix.

So where to start? The Deux Ex series has been super popular from what I hear, and Human Revolution has been pre-ordering like crazy. For all you non-gaming folk out there, pre-ordering is kind of like reserving a copy before it’s available in the store so that when it IS available you’ll get a copy. Jerk wads like GameStop actually remove OnLive vouchers from previously sealed boxes claiming that the OnLive game codes that you get when you buy the game competes with their cloud gaming service. I don’t know, if I was a gamer (which I’m not) I would expect my game to be sealed in shrink wrap when I bought it. Or maybe Gamestop should just rethink their shitty business model. Questionable practices indeed! But I digress.

Uh, yeah, so Deus Ex! Looks awesome. Here’s some concept art featuring Montreal’s Phillips Square and starring that dirt bag Burger King all done up future style. I sourced the image from here.  Below is the requisite comparison photo from Google Street View. 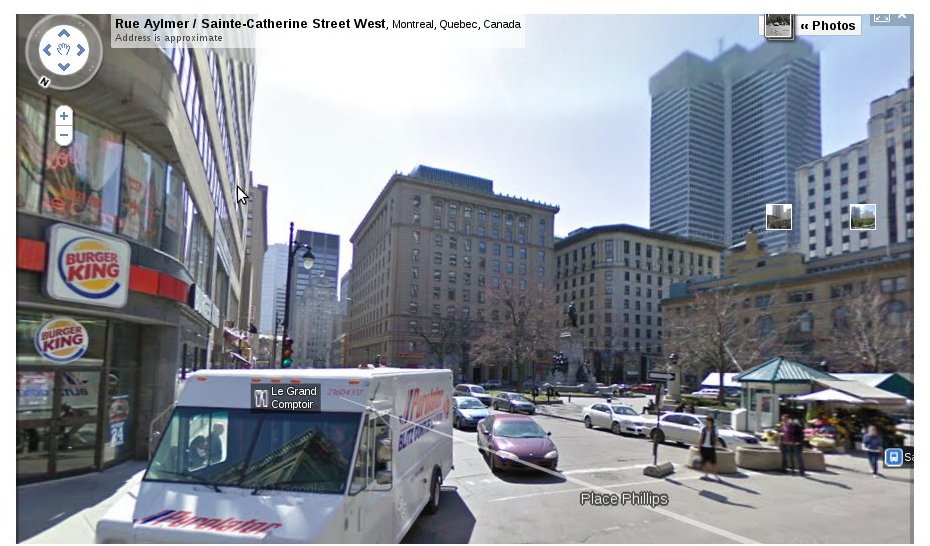 Slick. That’s all I can come up with! But it’s true. It’s got a lot going for it as an FPS RPG and all that. You’re basically a guy that has a bunch of missions to do all over the world and you get points as you complete stuff. There are also lots of achievements and you can finish the game in like 6 different ways. That’s a lot of ways!

Also, Deus Ex: Human Revolution is a prequel, so you can technically play this game before playing Deus Ex and Deus Ex: Invisible War. But I could be wrong.

Seriously though, Human Revolution looks awesome and I would totally play it if I had a PC or a gaming console.