I love how when you do a Google search for “McCain rising crust pizza is disgusting” (without the quotes), the #1 result is McCain.com. As if we’re expected to believe that the word “disgusting” resides somewhere on their website! It kind of makes me wonder if McCain isn’t involved in a little black or grey hat SEO magic. Either way, I’m pretty sure they’re paying the advertising dollars to net themselves a nice Google ranking.

Anyway, if you’ve ever tried McCain’s Rising “crust” pizza, you may have noticed two things:

a) It sucks.
b) The crust doesn’t cut or tear at all like crust is supposed to!

Over processed food is never a good thing

Now the thing about the crust of McCain Rising Crust Pizza.  I feel like this is one of those YOU HAD ONE JOB situations because the very crust rips a lot like wet cardboard might. That’s the only way I can describe it. Furthermore, crust should not “rip” like that nor should it have a weird plasticky (sp?) feel to it. It is almost as if it may not burn, char or go bad. Ever.

Now this is one of the problems with over processed food because the crust itself rises not with the help of yeast, but through some weird non-yeast chemical reaction. It also has a strange hollow feel to it and just doesn’t feel like bread. Based on the ingredients, I don’t think we can really call the dough ‘bread’, at least not by any self respecting chef. Anyway, I love a good pizza and sometimes I really don’t feel like cooking so I gave it a shot. I also ate the whole thing (as unsatisfying as that was) and I just felt sick afterwards. And no, it’s not because I ate the whole thing that I felt sick, because I am an athlete when it comes to eating entire pizzas. 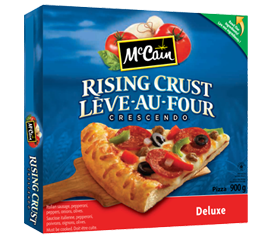 You see, being able to eat a whole pizza is the barometer of goodness. A proper, well made, medium sized pizza can be devoured by any self-respecting man in one sitting. Afterwards, he should drift off into a dreamless pizza coma, his thoughts becoming nothingness, like the pizza that once occupied the now empty box strewn across his coffee table.

With McCain’s Rising Crust “pizza”, halfway through eating it (I think this was the Crescendo) I found my brow beginning to furrow uncomfortably and uncontrollably, with a low-grade feeling of dread slowly washing over me. By the time I finished it, I was curled into a fetal position, too weak to change the channel and forced to watch the remnants of American Idol with my eyes closed.

Better stick to homemade pizza from now on.