Mike just posted 2 rather good posts. I simply cannot have that. I swore to keep the quality of this site way below average, and that bastard is sabotaging me big time.

First, I would like to talk about the awful awful ads that are sprinkled all over our main page. Sometimes I wake up at night, turn on the computer and fire up my favorite web browser (Google chrome of course). Then I interwebsurf to here, and look at the ads for a while. Then I hit F5, hoping that I’ll get a fresh batch. They are so fucking awful they make me forget about my own misery.

Lately I noticed one that I find particularly disturbing. Ladies and gentlemen, meet Notaurz, the diaper wearing happy minotaur: 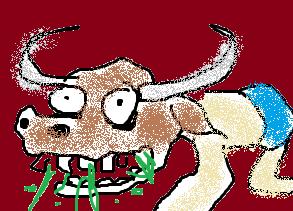 I… I don’t know man… The “normal” reaction to Notaurz would be to hate his guts I guess. But just look at him! With his huge soulless eyes, and his mouth full of grass, and that big dumb smile. It makes me want to adopt him, but just so I could drown him in the toilet. I’m sure he’d still be smiling that creepy smile through the whole process. Fucking Notaurz…

Ok, time for another brand new feature! The nano game reviews. Just enough info to interest you in a game or make sure you’ll never make the mistake of buying it. Here’s what I’ve been playing lately:

Rhythm Heaven 2 on DS: Already talked about it in the past, still totally hooked on it. LOTS of rhythm game fun, zero stupid peripherals.

Mario and Luigi Partners in Time on DS: First Mario RPG I’ve ever played, and I really like the twitch reflex dimension they added to the classic RPG mechanics.

Geo-defense Swarm on iPhone: Fun variation on the tower defense genre. The medium difficulty levels are much more difficult than the easy ones though. Still a must-own iPhone game.

Batman Arkham Asylum on PC: Every bit as good as everyone says it is.

Torchlight on PC: Great Diablo-like, made by the guys who brought you Diablo! Very short development cycle, and it shows on the amount of content. Quality is top notch though.

Need for Speed Shift on PC: I love racing games. I tend to prefer arcade ones (Midnight Club, Burnout). I’ll say this about NFS Shift: OMFG IT ROCKS SO MUCH. It’s the simulation racer made for the arcade racer fans. The expert mode is frustrating though.

Champions Online MMORPG on PC: Fuck this game. I used to have a lot of respect for Cryptic, was a big fan of City of Heroes/Villains, but this is not a good product. Decent graphics and combat but awful frame rate and weak design.

Soul Calibur Broken Destiny on PSP: It’s 100% Soul Calibur. The guest characters are much better than the Star Wars ones in SC4, the character creation is a blast. It pushes the PSP graphics to its limits, meaning it looks gorgeous.