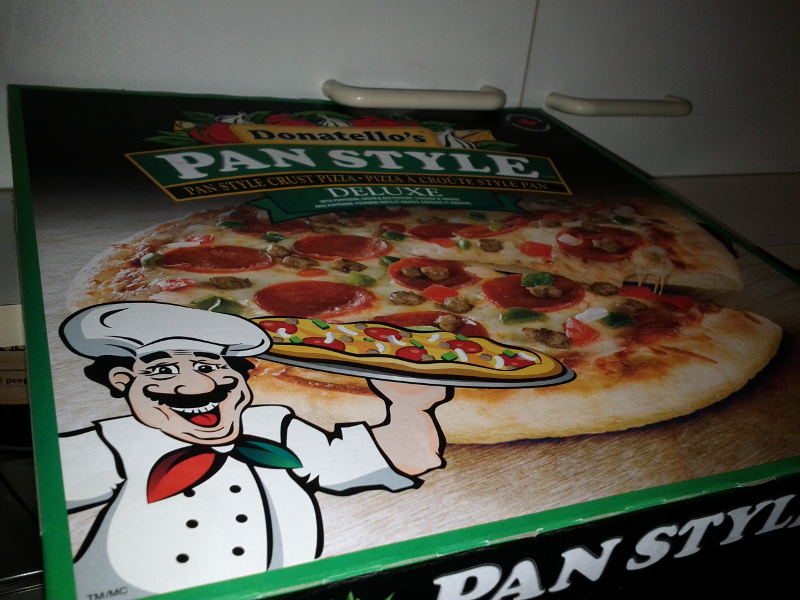 This post has been on the backburner (pun intended), so let it be known that I had taste-tested these pizzas before I went so-called vegetarian.

Don’t ask me why, but I ended up at Wal-Mart last month and found out that their new stores include a full-on grocery section. And yes, they’ve slashed prices on food just as they’ve done with their employees salaries. Yes, at Wal-Mart you too can enjoy everyday low salaries.

So wasn’t I surprised to see pizza for 3$ Yes. 3 dollars for a whole pizza, which raised the question: can we expect food that is this cheap to actually be food? Can one still classify it as edible? Well, we love ourselves a challenge so we picked up two boxes of pizza. One pizza was “Pan Style” and the other one was “Pizzeria Style” by brands Donatello and Red Baron respectively. Now you can’t judge pizza by the cover of the box that it’s in, but I’m pretty sure I didn’t trust Donatello from the start. Just look at that creepy chef and his matching smile. He knows something and you can tell by the way that he appears to be way too happy to be holding that pizza.

Red Baron on the other hand appears a little more sedate or confused, like maybe he doesn’t quite get how he went from flying fighter planes for the German Empire in WWI, to promoting shitty 3$ pizza for Wal-Mart. I mean really, where’s the link? 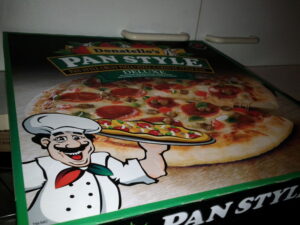 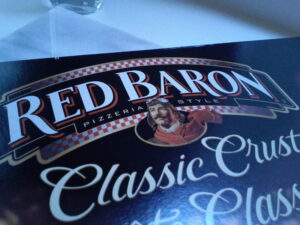 So we tried Donatello‘s creepy smile Pan Style pizza first. First observation: it smells weird although that could be me. And then…the texture. Like, you know it’s pizza, but it bakes like…I don’t know but something seemed off. It was as if every ingredient was one molecule off or something. We don’t usually go straight to this descriptor but we have to say that it was…disgusting. And truly, I am no snobby pizza purist but something did not work here. It’s pizza alright, but the crust tears weirdly in a way that was more in line with paper and less like bread. We managed to eat about half of it and then just gave up. Not much better than filler.

A few days later we cracked open Herr Red Baron’s pizza. Admittedly, this was much better than Donatello’s, but not life changing in any kind of amazing or groundbreaking way. The crust was better than Donnie’s but the sauce was tangy in a way that made me suspect that the ingredients may have been low quality and loaded with salt. Imagine that. From a 3$ pizza! And that’s all you really need to know.

Will not repeat. But when it comes to food this cheap, you’re probably better off just making your own homemade pizza.

2 thoughts on “Pizza vs Pizza”