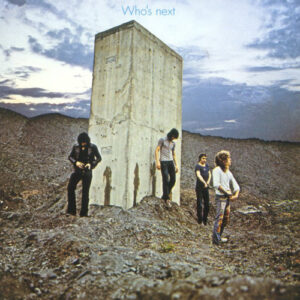 Back in the day, I used to listen to The Who’s classic Who’s Next over and over. It was one of those ‘perfect’ albums. Not too long (unless you get the 2 CD Deluxe Edition

), but epic, with a variety of tunes differing in scope and feel. The album (as I remembered it) was bookended by two equally massive and powerful songs, i.e., Baba O’Reilly and Won’t Get Fooled Again.

But that crappy show CSI ruined that for everybody! And they ruined BOTH songs for two separate shows! I hate you, David Caruso with your sunglasses and obvious one-liners like: No…this man didn’t just drown…he was murdered!

So onward we go.

I ended up downloading (yes I did) Who’s Next, because I lent my original copy, which I had on tape cassette (old skool, dude), to some girl, some summer, a long long time ago. She never gave it back, and I’ve never forgiven her. Yes, I hate you too along with David Caruso. I hope you two have a nice life together!

Anyhow, I put the whole album on my iPod and listened to it from beginning to end, just like old times, huh? Except somehow, it didn’t feel right anymore.  I’m not trashing it, because songs like Bargain, Love Ain’t for Keeping and Going Mobile still do it for me, just in a campy sort of way. The production value is still amazing, and there’s just no point in throwing any more accolades on Pete Townshend and Keith Moon. It’s all been said.

But I just can’t enjoy the full album anymore! And I know I’m not the first to say it. It’s CSI’s fault! When Roger Daltry’s scream escapes in Won’t Get Fooled Again, I see stylized bullets and ridiculous crime scene techniques followed by David Caruso’s Sunglasses

Yes, just another once great album reduced to a television association. Bah.

2 thoughts on “Does Who’s Next Still Hold Up?”