I had a few stalks of celery languishing in the fridge so I figured I better use it before it got all rubbery and disgusting. As you all know, when vegetables start to get a little “funny” in fridge, soup is always the answer. Since celery and potatoes are the main vegetables here, we can call this a celery potato soup recipe.

This really is an on-the-fly soup recipe so if you don’t like risky cooking, this celery soup recipe may not be for you. If you’re more daring,  let’s begin and get to the ingredients right away:

Main ingredients
1 tablespoon of butter
3 cloves of garlic (crushed)
Half a white onion (chopped)
1 celery stalk
3 fist fulls of potatoes (cut and peeled or not. Your choice!)
1 yellow bell pepper (for some texture)

On medium, heat the butter and garlic and onion.
When the onion and garlic starts to sizzle, throw in the celery. All of it. Cook it for a bit until it starts getting all steamy and then throw in around 4 cups of water. Maybe a little more. You get to gauge it because I don’t remember. Use your intuition and think of it as a challenge! Then toss in the potatoes and boil the whole thing until they’re soft enough to blend. Because you WILL be blending it at the end.

It’ll look like this. I forgot to take a soup in-progress picture so I reproduced it though the power of GIMP. Yes, the sun represents potatoes. Behold….Universe Soup! (pre-cooked) 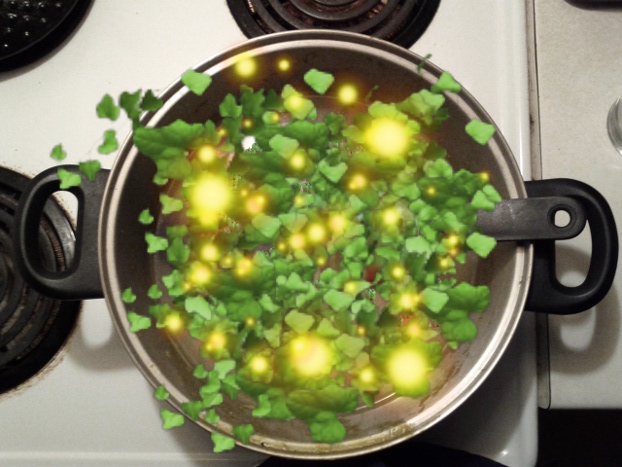 While stirring, grind the fresh black pepper into the mix. Throw in some salt if you want to bring up the cholesterol or however that works.

Finally, add about a half teaspoon of ground cumin. This is the key. Not too much, not too little.

Keep on boiling for x amount of time or until the potatoes are soft. Now turn off the heat and blend it in a blender. I like the Cusinart Smart Stick a lot. Seriously, this is my go-to tool for so much blending. If you’re using a traditional blender, you might have to do it in batches. That’s ok.

And that’s it! You’ve just made some delicious Celery Potato Universe Soup ™: