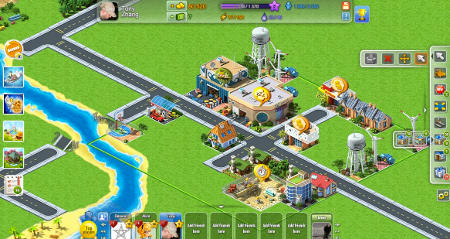 If you have a smart phone, chances are you’ve installed anywhere from a handful of apps to more than you could ever have time to explore. The results were probably predictable too: only a few of them were worth keeping. Now I know that a large percentage of an app’s appeal has to do with the individual, so an app that made me want to run outside and hurl myself into traffic might actually be your favorite game/app in the whole wide world, which makes us wonder: what is wrong with you?

So I went through my Play Store history and looked at some of the casualties that I’ve tried, hated, and uninstalled. The following reviews are solely our opinion and completely unbiased. Mostly.

Megapolis: By Social Quantum Ltd At first glance Megapolis promised to be a cool little Sim City style game. However, you can’t play unless you give it permission to spam your Facebook page Farmville style. So no, I have no idea what the gameplay is like because I uninstalled it soon after. This game has a great 4.2 out of 5 rating and over 10,000 people have given it 5 stars which tells me one thing: 10,000 people don’t give a fuck about game spamming their Facebook friends.

BFO Rating: Anger + Violent rage. Made me say ‘Piece of fucking…AGGHH!’ out loud.

Primal Feed: By Kelly Technology Inc. Ok ok, it’s an app, not a game. Still, great name. Get it? Primal “feed”?  It’s a feed about food. Brilliant, right? Well it’s a news aggregator for all things primal except there really aren’t enough feeds and the UI is horribly clumsy. You’re probably better off either adding your own feeds to your favorite reader like NewzReader, FeedDemon or Google Reader. Google Currents may do the trick too, or better yet: create some Google Alerts for Primal News. The main reason this fails is that there simply isn’t enough Primal news coming down the pipe to make this worthwhile. Best part about this app is that the logo is a badly drawn caveman.

BFO Rating: Annoyance + I made a loud ‘sigh’ noise while uninstalling.

Japanese Crossword: By WebReg LLC. Ok, maybe I don’t get it, because the reviews are overwhelmingly positive for this Paint-By-Numbers style game (aka Picross and nonograms), but the gameplay was just super frustrating. Full disclosure: I played this on a Nexus S, so maybe this plays better on a tablet or something with a bigger screen. Still, I had no issues with Cross Me and that had a stellar interface and was very playable. Japanese Crossword (can you pick a more generic name) has an annoying background that makes it hard to see what you’re doing. And selecting squares has very slow reaction and the accuracy is shit. It sucks in fact.

BFO Rating: Hate + Visible anger causing fellow commuters to move away from me.

Honourable Mention: Happy Fall by Noodlecake Studios Inc Happy Fall is the sequel to Happy Jump, and I’m probably dating myself here, but what the hell is going on in this game? And what the fuck is Happy Jump? It looks like gumdrops falling and you have to get as low as possible. I should probably read the description, except I won’t.