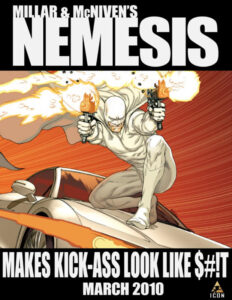 So before BFO started, when my good buddy Dan asked me if I was interested in doing comic book reviews, I said “hell yeah!!! I’ll work on something right away.”

One year later – yes I am the king of procrastination – here’s my first one. Here’s to hoping it won’t be the last.

Picked up Nemesis, the highly anticipated new series by Mark Millar (kick ass, the Ultimates, Civil War and Old Man Logan) and Steve McNiven (Old man Logan, Civil War, Avengers). I’ve been hearing about this comic for a few months now. It’s been hyped a lot and I’m not usually big on following the “flavour of the month” comic book. Or to get something just because the Internet says it’s gonna be good. So when it finally came out I decided to read it at the store before buying it.

Wow, was I ever wrong to have reservations about this book! In the first few pages you have a hotel blown up, a police detective squished by a bullet train, and said bullet train crashing in the street. Everything I like about comics!

Nemesis is about the world’s only supervillain who’s kick is to kill the best police officer of any given city. Turns up in Washington to call out the city’s supercop and mayhem and destruction ensue. Millar follows up on his “no quarter asked no quarter given” storytelling style with Steve McNiven who is probably one of the best superhero artist out there. The storytelling is crisp and fast paced and as you could expect from a Mark Millar story, very violent, irreverent, and very cool. The good thing is that this book has had so much hype and has been massively ordered by comic book shops, meaning that it shouldn’t be hard to find. I know that my local comic book store still has some copies left.

So come along for the ride I don’t think you’ll be disappointed.