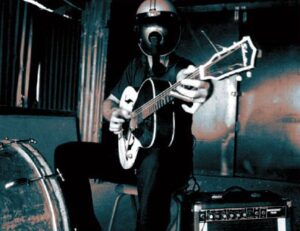 Well, he never left since the guy tours constantly and plays over 300 shows a year (I’m guessing), but he is back with his first album in 6 years! Actually, the new album was released back in March, so I’m super late about the whole thing. Either way, if that doesn’t make you happy, it should, because Bob Log III will melt your brain with his furious slide guitar. And everyone needs their brain melted once in awhile.

I have a soft spot in my heart for Bob Log III. The man plays Silvertone arch top guitars and if you’ve been reading my posts, you’ll remember that one time where I postulated profusely about my own Silvertone. If you don’t remember, well just scroll down. Or click the Silvertone tag. Or don’t.

I guess you can describe Bob’s style as fast Delta Blues, but what makes his sound unique is the ultra-low bass string tuning. In this tuning, the bass lines are present while he can plays the rhythm, so he gets a fuller sound. Those low strings are slack, in a JJ Cale kinda way. But where JJ Cale is slow and groovy, Bob Log is fast and dirty. Filthy even. Here are the specs on his tuning:

The new album is called My Shit is Perfect, which alludes to his flawless playing and timing. He’s just one of those guys who’s always in the zone when he plays. I won’t even go into detail about the helmet, the cannonball suit, or the telephone microphone. Just expect to hear more sleazy sex and scotch induced slide guitar from my favorite one-man band.

Bob is also probably the only musician to ever ‘raft’ the crowd. Just watch the video and you’ll see what I mean.