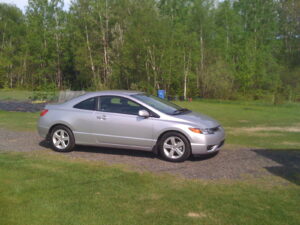 Hey everyone. I just bought a car! A brand new Honda Civic coupe. I love it to death. I would review it but it’d be a boring read. Absolutely everything rocks about it. EVERYTHING! So I’ll post a great tuna melt recipe instead.

But before I start talking about the recipe, I need to fill the white space to the right of the pic with random stuff, else it looks bad. I been playing Stick Wars on the iPhone lately. A very interesting take on the tower defense genre. I don’t even know if it fits in the tower defense category, but still, it’s fast paced and addictive and funny. I suggest you give it a try.

Cut the celery and the half pepper in tiny dice. Mix the tuna, the mayo, the curry and the freshly chopped veggies together. Cut the lime in 2 and press the juice of both halves in the mix. Stir until the texture is uniform. Cut the half baguette open, spread some butter on it. Put in the tuna stuff. Add the slices of havarti cheese. Pre-heat the oven to 375 celcius. Keep the sandwich open and slide it into the oven for 20 minutes or until the cheese is completely melted. Once it’s out of the oven, let it rest for a minute or so and then enjoy. Mmmmm, it’s succulent!

This recipe works well with a bunch of different breads and cheeses. Keiser rolls are great, as well as panini breads. As for the cheese, good old cheddar is also good, as well as Jarlsberg. Hell, even Kraft Singles would probably do the trick…

That’s it for now folks!

Coming up soon: How to add a service to Solaris 10’s SMF, and what to do when it (surprisingly) doesn’t work. Stay tuned.