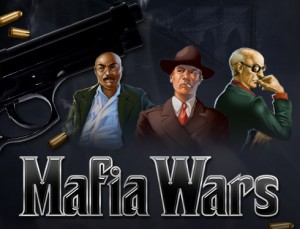 My previous Mafia Wars gaming post was getting way too long, so here are some nicely contained tips for y’all:

Like any role playing game, your character gets stronger each time you level up. What should you do with those hard earned skill points?

Defense: I cannot stress this enough. Whether you’re buying armor, weapons or vehicles, think about defense before attack. As well, whenever you level up, use your skill points to increase your defense before anything else. As a rule of thumb, I increase 2 defense for every 1 attack. The rest gets spread over Energy, Stamina and Health.

Attack: Attack is very important as well, but since you should be putting most of your skill points into defense, back up your attack by having good weapons. So buy Chain Guns and Town Cars. You’ll notice that they get used in your fights often because they are among your strongest items, aside from items collected into your loot.

Godfather Points: Godfather points are used to buy extra skill points, mafia members, mystery loot as well as topping up your stamina, health and energy. Since they are hard to come buy, I’d recommend using them to buy skill points and pad your defense and attack. Don’t waste your godfather points on changing your name. If you’re just starting out, choose a name you’ll be happy with. For originality (and privacy), stay away from using your real name as your character name.

Loot: Loot is acquired through Jobs and Fights. The more jobs and fights you do, the more loot you have the chance of getting, which will increase your ability to win more fights in the future and level up faster. So fight often!

Limited Edition Loot: These items are offered by the game on a weekly basis. Usually the item has some significance related to a current event or holiday. For example, a recent one was an Indy Racer as a nod to the 93rd annual Indy 500. It’s a good idea to buy a lot of these whenever they come out since they offer a good attack/defense ratio, but there’s a catch: You can only buy 1 for every 2 friends you have. So you’ll have to go get some more friends if you want to beef up on these special items. Which brings us to…

Getting a bigger mafia: Ok, I said it before. Facebook sucks, but dammit, I have a mafia to run, so let’s add some “friends” who are even lower on the totem pole than John McClendon from my grade 3 second period finger painting class who made me eat glue that one time. There are two ways to do this:

Fighting other players: If you’re being attacked over and over, don’t sweat it. First, build on your defense. As you get stronger, people will start leaving you alone. If, on the other hand, you attack indiscriminately (attacking the same people over and over again, day after day), you’ll get a bad rep and you’ll end up on the Hitlist. A lot. But even that isn’t such a big deal.

Super tip: When you fight other players, you become more visible. If you attack often, prepare to have to defend yourself.

Properties and getting robbed: We all get greedy sometimes, and buying a lot of Mega Casinos is a good way to generate cash. But be careful: overextending yourself will leave you with damaged property, with little to defend with. Only build what you can afford, and build a lot if you have the defense to back it up. You need to have a strong mafia, good armor and weapons, and nicely padded profile points. If you’re still getting robbed, don’t repair and collect the 30% that you’ll get anyway until you’re at a higher level.

In the end, there’s not a lot you can do to stop attacks since that’s a major part of the game anyway. But, you can choose your fights and know when to walk away from one. What would you do in the real world?

There are also a couple of other nice ways to beef up you character:

Now sit back, grow your mafia and get stronger. Trust me. You’ll get there with patience. I’m not aware of any cheats or bots for easy leveling, but I would strongly advise against installing any extra software on your machine since that’s a quick way to get viruses. Play fair and you’ll have more fun.

Current City Update: A lot of people have been asking me how to defeat Enzo Casazza in Italy. Well he’s VERY hard to beat, but totally doable. You can even beat him without using any consumables, but it takes a very long time. The main thing is to have around 500 Stamina points. Then, go into the fight, stun, attack, shiv or grenade, attack, die, then leave the fight and heal in Moscow or wherever. Repeat this, and you will beat Enzo Casazza and get the Enzo’s Monocle. Trust me, it takes a long time, but be patient. Try doing this job when you’re getting ready to level up. That way you’ll get your stamina refill if you need it.

Brazil Update: Well it looks like you need a lot of cash (Real) in Brazil. Similar to Bangkok, you can sell city items from completed levels. The only difference is that it’s hard to tell what items are needed for each level. In Brazil, I did my best to figure out the number of items required in the following districts:

In the end, it’s really not clear and I think Zynga is doing this on purpose to make it more challenging. But, if you’re on Sao Paolo or Recife, you’re going to need more cash. You can usually sell off the items required for Rio de Janeiro, Belem and Manaus. That should give you enough Real to get through these levels.

Another strategy is to balance your jobs between districts and buy a few required items at a time before banking your cash.

Also, three more districts will be added to Brazil soon.

God I hate this game.