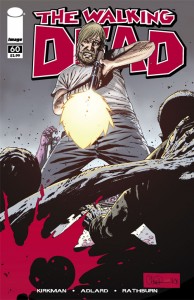 If you’ve been anywhere within listening range during the last year or so, I’ve probably tried to steer the conversation towards The Walking Dead at some point.

follows a group of survivors as they try to navigate their way through a zombie apocalypse. The focus is mainly on Rick who, back in issue #1, wakes up from a coma to find that the world has gone to hell. That initial premise is reminiscent of 28 Days Later, but the similarities end there. That said, I won’t be going into a full synopsis of the series since it’s much more fun to discover on your own, so check out Image Comics, or the Wikipedia entry for the full low-down.

The zombie genre has been done, re-done, and done to death, but Kirkman has a way of telling a story that keeps you engaged without focusing solely on random zombie attacks (which are still fun). Marry that with Charlie Adlard‘s astounding artwork (and Tony Moore’s from issues 1 to 6), and you have a series that’s immediately addictive and reads way too fast. I’m sure I’m not alone when I say that upon discovering The Walking Dead, I burned through the first 8 collections in about 1 week and now have to suffer while I wait for the monthlies.

I wasn’t going to draw any parallels between the undead and rabid Walking Dead fans impatiently waiting for the next issue but hey, I just did. Who could resist?

The Walking Dead Issue #60 will  be released on April 15