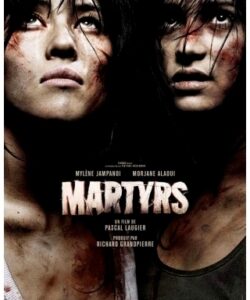 I was looking for a good horror flick and found Martyrs, a French movie. I know what you’re thinking (I thought the same thing); French people always sucked at making horror movies and it’s probably why there are so few of them. Well, this one was surprisingly good all throughout its hour and forty minutes.

I must admit that I am used to a European style that’s got a much slower pace than say, Michael Bay movies.  So when Martyrs started, I wasn’t ready for what was coming. It starts so fast you don’t even have time to think about stuff like what other movies you saw this actress in or what her name is for that matter. It’s like a slap in your face right from the get go but it doesn’t stop there; it keeps hitting you as the film goes on.

The first part starts knee deep in pure madness. Madness that has a name: Payback. As the story unfolds, you learn that salvation has a higher price for some people, and that being beaten and tortured without knowing the reason why can drive one mad. The violence in this movie is so brutal and unexpected, it ends up being much more efficient than the stuff from movies like Saw or Hostel.

The first part is hard to watch yet it keeps you glued to your TV. And then halfway through, the movie ends. Kinda. You’re left wondering where all of this was going, but at the same time it’s clear the story just could not push further in that direction.

Then comes the explanation for all this suffering, like a brutal conclusion but right in the middle of the movie. I was lost. Why?! Why toy with me like this?! I wondered. This second half is much harder and gorier. More intense in every aspect, but it doesn’t feel like a classic torture movie. Knowing why all of it is happening totally changes the way you see it. Believe me.

I won’t spoil the ending (of course). You got to see it for yourselves. The conclusion is… well it’s a French movie and it stays true to its origin at least on that aspect… I encourage you to check out the trailer.

Horror movie fans, this one is a must see, I guarantee you won’t be disappointed. I wasn’t!